We took into consideration a myriad of factors, among which computerisation, functionality and financial factors.

Having said this, we’ve found that the Skywatcher Evostar-90 AZ-3 is the best possible solution for anyone looking for high quality at a decent price.

In terms of computerisation, we’ve found that for the price it goes under, the Celestron 22096 NexStar 102 SLT offers a fantastic finderscope that can help you more easily locate certain celestial objects.

Finally, if you are on a budget and are looking for a good quality telescope, the Celestron 21064 AstroMaster 90EQ refractor telescope would be your best bet.

What Are Refractor Telescopes?

Although the name may sound a bit intimidating, refractor telescopes are none other than those most of us think of when we think about telescopes. In fact, Galileo Galilei used the same type of telescope back in 1609, when he was exploring the sky.

The way refractor telescopes work is pretty straightforward. At the top of the tube they have a large glass objective lens that helps capture light, which is then focused at the bottom of the tube where an eyepiece transforms it into an image our brain can perceive and has knowledge of, such as the stars or the Moon.

Since earlier versions had lenses with spherical curvature, users and astronomers struggled with image distortion towards the edge of the field of view. Another issue that came up with that specific type of lenses, was that they produced chromatic aberration – this means that ray lights such as green, blue and red focused at different points, making the stars and planets encompassed by coloured halos.

Thankfully the chromatic aberration issue was successfully addressed in the mid 1750s, when refractor telescopes with two objective lenses were introduced. This is why you’ll find that all refractors on today’s market are built to also incorporate this ‘achromatic’ objective.

What to Look for When Purchasing a Refractor Telescope?

Right from the get-go, it’s safe to say that refractor telescopes are, by nature, excellent observation tools that will enable you to see fine details on the surface of the planets and the moon.

However, you will still need to get one with achromatic lenses, as well as with a focal ratio of minimum f/10. If you do go lower than this number, remember there’s a great chance you’re dealing with false colour. As a casual user, an 80mm or 90mm refractor will do a terrific job in observing the Moon and other planets.

If you want a more professional telescope, that can offer a more in-depth outlook of the night sky, you should go with one that has apochromatic refractor lenses. With it, you cannot only get a clear image of the planets and the Moon, but also of Milky Way star clusters and nebulae. If you do decide to get these, be prepared for the oversized price tag, which swells up by a £1,000 for each additional inch of aperture. 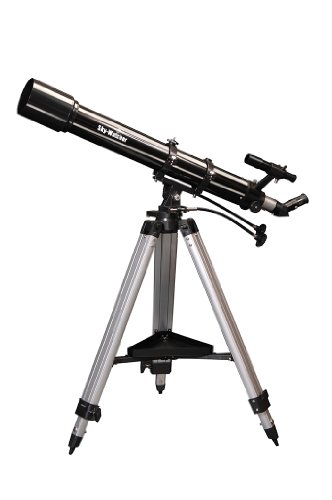 The Skywatcher Evostar 90 AZ-3 is a two-element, multi-coated objective achromatic telescope that is ideal for both regular and professional use. The telescope comes with two eyepieces, the 10-mm and 25-mm versions, which enables you to use the telescope in different depths and thus, observe sky objects that are situated at varying lengths. To this end, the magnification options are 36x and 90x, with optics included.

It has a long focal length and the way it’s built only stands testament to the precision and high standards it represents. The telescope captures 65% more light than a 70mm version, which basically guarantees that you’ll get crystal clear images that will leave you in awe and wonder.

In the box, you’ll also find a 6 x 30 finderscope, which will help you better identify and align certain sky objects. Apart from this, it also comes with an included high-quality AZ3 deluxe alt-azimuth mount, as well as with an aluminium tripod with accessory tray.

The Skywatcher Evostar 90 AZ-3 refractor telescope is great at offering amazing deep-space views, a feature that makes it popular both among regular users and professionals.

You can use it to perform detailed observations of the Moon, certain planets, such as Jupiter and Saturn, as well as other celestial objects of the Solar System.

A possible inconvenience, as mentioned by one customer, is that the viewing angle can get pretty low whenever you need to view an object that’s very high up. This can be easily fixable by placing a small seat under it, so you can watch the sky in a comfortable position. What’s more, this does tend to happen with telescopes, so it shouldn’t be regarded as a deal breaker.

This telescope certainly doesn’t compare with the remarkable features of an apochromatic, but it wasn’t meant to either. This is a powerful refractor telescope that does very well for the audience segment it was assigned to.

Because of its high quality and affordable price, the customers all love this product. It’s absolutely great for more casual use, as well as for professional observations and studies.

Considering the functionalities it offers, as well as the price you can get it for, the Skywatcher Evostar 90 AZ-3 is absolutely unbeatable. Few offers are just as good as this one, regardless if you are just starting to dabble in astronomy or have already taken some steps in this direction. 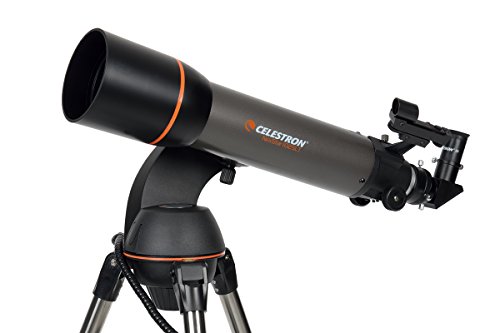 The Celestron 22096 NexStar 102 SLT Computerised Telescope is meant to be an entry-level to mid-level computerised GoTo telescope, designed to be bought at an affordable price. To this end, it’s not surprising to see how quickly it can be assembled thanks to its adjustable stainless steel tripod and quick-release tubes and fork arms.

This telescope provides great optics, allowing you to inspect the surface of the Moon, Mars, Venus in all its phases, Saturn along with its rings, as well Jupiter and its four moons. Having said this, compared to 80mm models, the Celestron 22096 NexStar 102 SLT offers 63% brighter images, also thanks to its f/5 optical system.

What sets this telescope apart is its computerised hand control that allows you viewing access to more than 4,000 celestial objects from its database.

The telescope has also been improved with the new SkyAlingment Technology that together with the Finderscope and the convenient additional red LED make it considerably easy for you to reach proper alignment.

What’s more, the telescope can also be used for terrestrial observations.

Any entry-level and mid-level users will be happy to know the Celestron 22096 NexStar 102 SLT Computerised Telescope was built especially for them. With its hassle-free setup and great optics, this telescope is a great solution for anyone wanting to get stunning images of the Moon’s craters, Saturn’s rings or Jupiter’s moons.

Apart from this, one of the telescope’s most astounding features is the SkyAlingment Technology that can help you easily locate one of the 4,000 celestial objects stored in its database. All you need to know is the name of the formation you are looking for and feed the telescope appropriate information, such as your approximate latitude and longitude.

According to some reviews, it may be possible for you to need an extra helping hand or simply put more effort into mounting the scope to the tripod.

Another point worth mentioning is that the telescope quickly eats up the power given by eight AA batteries, which can lead to inconvenient costs and efforts down the line. However, this issue can easily be corrected by replacing the batteries with rechargeable ones, since the telescope accepts them as well.

What Other Customers Thinks

The great majority of reviewers love the Celestron 22096 NexStar 102 SLT Computerised Telescope, as it provides clear and exciting images of the planets and stars, is great at locating them on the sky and lastly, it’s very easy to set up. There seem to be a few flaws, such as the ones mentioned above, but they do not weigh enough to truly downgrade the value of this product.

If you are looking for a high-quality refractor telescope, whose computerisation system definitely improves your viewing experience, you shouldn’t hesitate in getting the Celestron 22096 NexStar 102 SLT Computerised Telescope. 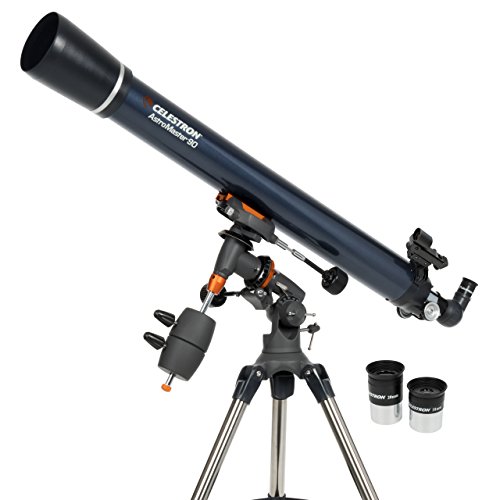 The Celestron 21064 AstroMaster 90EQ Refractor Telescope is created by its designer to be used both for terrestrial and celestial observations.

The telescope offers bright and clear images of the moon, Jupiter’s four moons and Saturn’s rings. It also comes accompanied by two eyepieces – a 20mm eyepiece and a 10mm eyepiece, that you can use according to your needs.

The telescope also has a permanently mounted StarPointer as well as the Motor Drive system, that you can use to better track the celestial objects you’re interested in.

The AstroMaster also has smart and useful small touches to its design, such as a deluxe accessory tray. You can use this one to store all your accessories and have a hassle-free viewing session.

Even though the Celestron 21064 AstroMaster 90EQ Refractor Telescope can also be used for terrestrial viewings, it shines best when it’s used for celestial observations. Especially considering the fact that it offers great, clear images of the Moon, Saturn’s rings and Jupiter’s moons.

If you’re an entry-level user, you’ll happy to know the telescope is equipped with a 10,000 object database, which means it can help you more easily locate them on the sky.

As some customers claim, the integrated Star Pointer system can be a bit inefficient in locating the desired object with maximum accuracy. However it can be used just the same as a referencing system.

Another minor flaw of the Celestron 21064 AstroMaster 90EQ Refractor Telescope is that it’s a bit wobbly when you need to rotate it during viewing. And although it can be a bit bothersome, it does not actually impact the viewing experience.

Customers are mostly thrilled with what this telescope has to offer considering the price it’s listed under. This makes it a great find for both entry-level users and family activities.

There are a few minor flaws that come attached with this highly affordable price, but none of them are actual deal breakers.

Should You Get It?

If you are just barely starting out to discover what astronomy has to offer or have children whom you’d like to get accustomed with this field, the Celestron 21064 AstroMaster 90EQ Refractor Telescope is the perfect find, at a really affordable price. Its quality level is high enough to get you passionate and hooked on stargazing, while also leaving you wanting to see more. 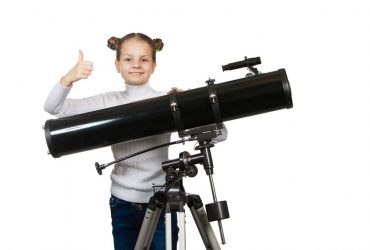 Buying a telescope for a child can be challenging for a number of reasons. To …
Equipment
More 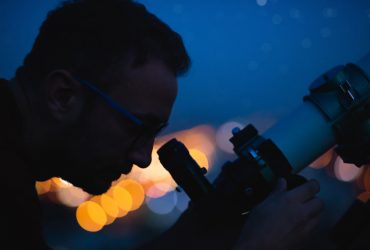 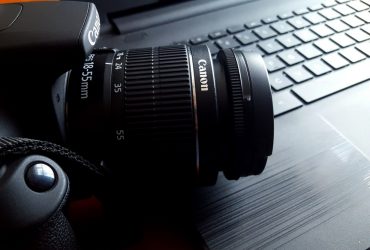